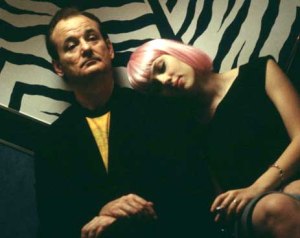 Can you keep a secret? I’m trying to organize a prison break. I need like, what, an accomplice. We have to first get out of this bar, then the hotel, then the city, and then the country. Are you in or you out?

The movie opens with Bob Harris (Bill Murray) arriving from the United States at his hotel in Tokyo. Bob is a well-known action film star whose career is on the slide and he is in Tokyo to shoot a whiskey commercial. At a low point in his life and feeling a strong sense of culture shock, Bob is feeling lost and lonely, spending his non-working hours in his hotel. Here, he runs into another lonely person Charlotte (Scarlett Johansson), a philosophy graduate and young wife. Still trying to find her purpose in life, Charlotte is in Tokyo with her husband (Giovanni Ribisi), a successful photographer working in Japan. Left on their own a lot and both experiencing bouts of insomnia, Charlotte and Bob are drawn to each other, as they see a fellow displaced soul trying to find some meaning to life. During the course of the film, the two set off together and experience the craziness and frantic pace of the city. Through their growing relationship, they not only discover fun and adventure, but also their connection to life again.

Lost In Translation is a funny and poignant fish out of water tale of two lonely people who find themselves lost in a foreign city. There are moments that are extremely funny, as Bob and Charlotte find themselves at odds with the sensory overload of their foreign surroundings. There also moments that are extremely sad and touching, as these two very different people reach out to each other and share their feelings. Lost In Translation is Sophia Coppola’s second feature film as a writer/director and she has created a wonderful story of two people coming together against the bright and shining lights of Tokyo. Bill Murray, in particular, delivers a beautiful and understated performance that is both very funny and sad. The audience can see the depth of emotion and loneliness in his eyes. Lost In Translation is a touching and hopeful tale of two people who re-discover their humanity through connecting with another person. The film is a truly wonderful little film with a big message.

Lost in Translation was well received by critics and audiences. On Rotten Tomatoes, 95% of the critics gave the film a positive review, based on 219 reviews. On Metacritic, the film received a score of 89 out 100, based on 44 reviews.

The movie did well domestically at the box office, especially for a low budget, independent film, grossing over $44 million.  It was the 67th highest grossing film of 2003. The top 10 films that year were: The Lord of the Rings: The Return of the King; Finding Nemo; Pirates of the Caribbean: The Curse of the Black Pearl; The Matrix Reloaded; Bruce Almighty; X2: X-Men United; Elf; Terminator 3: Rise of the Machines; The Matrix Revolutions; and Cheaper by the Dozen. Internationally, the movie took in over $119 million.

The film received many film awards, racking up 82 wins & 63 nominations. Lost in Translation was nominated for 4 Academy Awards, including Best Picture. The movie went on to win an Academy Award for Best Original Screenplay. The Best Picture winner that year was The Lord of the Rings: The Return of the King.