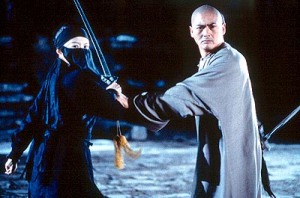 The things we touch have no permanence. My master would say: there is nothing we can hold onto in this world. Only by letting go can we truly possess what is real.

The first day of our festival took us to a mythical depiction of historic China and Ang Lee‘s masterpiece 2000’s Crouching Tiger, Hidden Dragon. The movie features an international cast headed by Yun-Fat Chow, Michelle Yeoh and Zhang Ziyi.

The film opens with legendary warrior Li Mu Bai (Chow Yun-Fat) meeting with his old friend and fellow skilled fighter Yu Shu Lien (Michelle Yeoh). Li Mu Bai has experienced an epiphany and has decided to give up his life as a warrior. He asks Yu Shu Lien to deliver his famed weapon, known as Green Destiny, as a gift to Sir Te in Peking, as she and her men are to safely transport goods there. Haunting both Li Mu Bai and Yu Shu Lien though is their unexpressed love for each other, as well as Li Mu Bai’s master’s death at the hands of the villainous witch Jade Fox. Upon her arrival in Peking, Yu Shu Lien meets Governor Yu’s daughter Jen (Zhang Ziyi), a strong-willed, adventurous girl who is not happy about her impending arranged marriage. Soon after, events take a sudden turn when Green Destiny is stolen by an unknown masked thief and Jade Fox re-enters the picture. Li Mu Bai is forced out of his short retirement and must join forces with Yu Shu Lien to regain the sword and battle his old enemy.

The film is a mystical and magical journey  that plays out like a richly crafted fairy tale. The audience is swept away on an epic adventure, like being on a magic carpet ride. There are compelling and conflicted heroes/heroines, formidable villains, magic and true love. The cinematography and art direction are visually stunning and are accompanied by a beautiful and haunting score. The exciting fight sequences are inventive. The performances, especially from Michelle Yeoh, are compelling and richly nuanced. Crouching Tiger, Hidden Dragon is truly one of the great epic adventure films of the last decade, as it weaves a grand tale of redemption and love.

Crouching Tiger, Hidden Dragon was well received by critics and audiences. On Rotten Tomatoes, 97% of the critics gave the film a positive review, based on 143 reviews. On Metacritic, the film received a score of 93 out 100, based on 31 reviews.

The movie did well domestically at the box office, especially for a foreign language film in Mandarin Chinese, grossing over $128 million through a 31week run.  It was the 12th highest grossing film of 2000, placing behind How the Grinch Stole Christmas; Cast Away; Mission: Impossible II; Gladiator; What Women Want; The Perfect Storm; Meet The Parents; X-Men; Scary Movie; What Lies Beneath; and Dinosaur. Internationally, the movie took in over $213 million.