Scary, witty, funny and poignant, Buffy the Vampire Slayer  tells the story of Buffy, a girl who wants to be normal but struggles with a powerful destiny. It is truly a groundbreaking television program — well written and directed — it uses the supernatural occurrences as metaphors for its coming of age story lines. Buffy the Vampire Slayer has also spawned a whole generation of similar programs with supernatural coming of age stories.

In order, here are my favourite episodes of Buffy The Vampire Slayer: 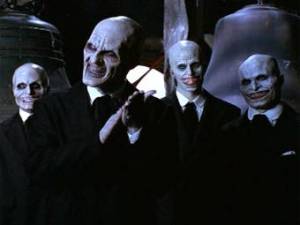 The Gentlemen, evil creatures from a fairy tale, first steal the voices of everyone in Sunnydale and then seek to kill them by removing their hearts.

A truly creepy and frightening episode, as the victims are unable to cry out for help.

Can’t even shout, can’t even cry
The gentlemen are coming by
Looking in windows, knocking on doors
They need to take seven and they might take yours
Can’t call to mom, can’t say a word
You’re gonna die screaming but you won’t be heard. 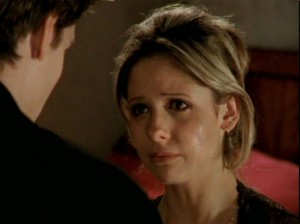 After Buffy loses her virginity to Angel, Angel loses his soul from experiencing a moment of true happiness and lashes out with cruelty.

The story becomes a metaphor for the experience of growing up and the feelings around discovering your sexuality.

Angelus: You got a lot to learn about men, kiddo. Although I guess you proved that last night.

Buffy must deal with the unexpected death of their mother.

A truly heartbreaking depiction as the audience also experiences Buffy’s numbness and shock at losing someone close.

Buffy, Willow, Xander, and Giles have nightmares in which they are pursued by the same mysterious figure.

One of the most fascinating and realistic depictions of how surreal, comical and horrifying our dream worlds are like.

I have no speech, no name. I live in the action of death. The blood cry, the penetrating wound. I am destruction, absolute, alone.

Everyone in Sunnydale is under a spell that causes them to burst into full musical numbers through which they reveal their innermost secrets.

Sweet: What a lot of fun
You guys have been real swell.
And there’s not a one
Who can say this ended well.
All those secrets you’ve been concealing.
Say you’re happy now
Once more with feeling.
Now I gotta run.
See you all
In Hell.

As Jenny Calendar searches for a way to restore Angel’s soul, Angel steps up his torment of Buffy and her friends with tragic results.

This is one of the most tragically unsettling episodes in the series — revealing a world where no one is safe.

Angelus: Passion. It lies in all of us. Sleeping…waiting…and though unwanted…unbidden…it will stir…open its jaws, and howl. It speaks to us…guides us. Passion rules us all. And we obey. What other choice do we have? Passion is the source of our finest moments. the joy of love…the clarity of hatred…and the ecstasy of grief. It hurts sometimes more than we can bear. If we could live without passion, maybe we’d know some kind of peace. But we would be hollow. Empty rooms, shuttered and dank. Without passion, we’d truly be dead.

Buffy realizes that she is in a mental asylum and that her whole life has all been really playing out in her delusional mind … or has is it?

The episode focuses on Buffy’s desire to lead a normal life away from all the supernatural drama and violence. Here, she has to make the difficult choice of which reality she wants to stay in.

Buffy: I was in an institution. There were doctors, and nurses and other patients, they told me that I was sick… I guess crazy. And that Sunnydale and all of this, none of it was real.  Xander: Oh, come on, that’s ridiculous! What, you think this isn’t real just because of all the vampires, and demons, and ex-vengeance demons, and the sister that used to be a big ball of universe-destroying energy?

Cordelia thinks that Buffy is the cause of all her problems and wishes that Buffy had never come to Sunnydale, plunging Cordelia into an alternate Universe where vampires control the town.

This episode is a fun and twisted take on It’s A Wonderful Life.

Giles: Cordelia Chase. What did she wish for? Anyanka: I had no idea her wish would be so exciting! ‘Brave new world.’ I hope she likes it.

While hospitalized with a severe flu, Buffy battles a demon that sucks the life out of sick children.

Next to Hush, this is the most creepy and terrifying episode in the series.

Ryan: He comes at night. The grown-ups don’t see him. He was with Tina. He’ll come back for us. Buffy: Who? Ryan: Death.

Willow casts a spell that accidentally causes everyone to forget who they are.

This is a very funny episode, as each person has to re-invent and re-discover themselves with comic consequences.

6 thoughts on “Best of Buffy the Vampire Slayer”